Nemesis is a Diabolic – a special type of humanoid bred specifically to be bonded to and protect one human master. Sidonia is Nemesis’ human – they have been raised together, but Nemesis would instantly give her life – or take any number of others – to keep Sidonia safe. Trouble ensues when Sidonia’s father, part of the Galactic Court, is discovered by the Emperor to be participating in a rebellion. Sidonia is summoned to the court but, fearful that Sidonia is being summoned to her death, her mother sends Nemesis in her place.

Nemesis must learn to be human and engage convincingly with the court, filled with both corrupt politicians and back stabbing politicians children, a rebellion looming over them all. 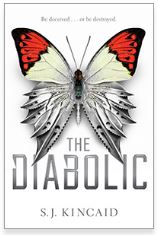 Judging from the praise on Goodreads, I’m one of about 5 people who didn’t enjoy this book. I can narrow this down to one thing – I simply didn’t like the main character.

Diabolics are created to only feel love for the human they are bonded to, and their upbringing is a violent survival of the fittest contest. This apparently means that they also can’t feel any emotions or empathy for anyone at all. The first quarter of the book was incredibly dry for this reason, and I feel as though I didn’t get to know Nemesis at all during this portion of the book.

Thank goodness we then are introduced to Tyrus, who is hands down one of the best characters of the book that we spend any time with. His presence livens things up a bit.

Nemesis then discovers she can feel something after all and the book turns into an unexpected (to me anyway) love story. Except one of the main participants in said love story (yep, Nemesis – you guessed it) oscillates between I CAN’T FEEL ANYTHING and I’M HAVING ALL THE FEELS!!! so often I still feel a little whiplashed from it.

On top of this, old Nemesis seems a bit thick – she is put in the middle of a number of political situations and manages to shoot herself in the foot a number of times by speaking about how she really feels to key rivals rather than continuing the masquerade that she doesn’t seem to have a problem with the rest of the time.

Ostensibly this story is of Nemesis’ journey from servile non-human, to a fully developed human being capable of love and empathy. But I don’t think she makes it.

Thanks to Netgalley and Simon and Schuster for and advanced copy in return for an honest review.