Review: The Wangs Vs the World

The Wangs used to have everything, but now all they have is each other.

The father, Charles, is a self made man. He is Chinese, but spent most of his life in Taiwan and then the US where he made his fortune in the make up game. Now it is all gone, and he has one hope – the land in China surrendered by his forbears to the government. He is a Wang – a king – so surely he deserves it. But first he needs to gather his children scattered across the US. 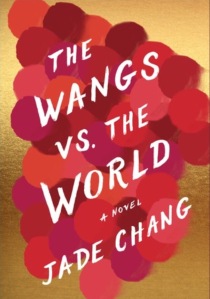 Saina wants to be an artist, but she’s not doing great. He idea of art seems to make people cross. Her love life on the other hand is an absolute disaster. The last thing she needs is her family landing on her doorstep, complicating her attempts to sort her life out.

Andrew is a college student – or used to be before his father couldn’t pay his fees any more. All he wants is two things – to be a stand up comedian, and to find a woman to love so he can finally have sex.

Grace is sixteen and can’t believe her father has been so careless as to lose all their money. Surely this is some sort of elaborate joke he’s playing on them all. Surely she can’t be poor now – what does that even mean? Hauled out of her boarding school, Grace is certain this is just some mistake that her father will fix.

Barbra is Charles’s second wife, and still feels she is living in the shadow of the beautiful, tragically dead May Lee, the children’s mother. She knows she is not a mother, and has only ever been able to engender vaguely hostile tolerance from his children. This road trip will surely be a bundle of fun.

Putting the ‘fun’ back into dysfunctional,The Wangs Vs the World reminded me a little of National Lampoon’s vacation but with better characters and, thankfully, minus the grandmother strapped to the roof.

The main characters are all delightful and well rendered. I particularly loved that each character was taking a very different personal journey, even though they were all stuck in the same car.

4 out of 5 Richard Pryor posters.