What I’ve Been Reading

I’m going to try to remedy my lack of posting with some more regular posts summarising what I have been reading. I mightn’t have been writing much, but I’ve been reading a lot – I’ve just ticked off my 100th title for the year so I can at least tell you what I’m powering through. I’ve resisted doing this in the past as I’ve for the most part tried to keep my review posts focussed on one book. But I’m hoping this format will work better for me while I’m still flat out at work and finding less time to post.

The readathon weekend was ‘Stella’ – I managed to get through two titles from the Stella shortlist, the prize winner, and Begin, End, Begin, the #LoveOzYA Anthology.

This is artful book by Heather Rose is about the art of Marina Abramovic, and in particular her performance of “The Artist is Present” at the Museum of Modern Art in New York. It is a book about love, courage and sacrifice. Most of the book is told through the eyes of Arky Levin, a film composer who is going through a bit of a slump in both his career and his personal life. Levin’s wife is very ill and living in a facility. She has banned him from seeing her, and he is not fighting the ban, much to the disappointment and anger of their friends and, more importantly, their daughter.

I enjoyed the book up to a point, but I became more annoyed the more I sat with the ending. Levin spent most of the book being a dick, and by the end he managed to be not quite such a complete dick. The other thing I was disappointed by was the author’s lack of acknowledgement of the dreadfully racist things that Marina Abramovic has said about the Australian Aboriginal people. It makes me dreadfully disappointed that this book won the Stella award this year. (Thanks to Bookish Bron for the conversation about this one and for reminding me about that last point.)

Georgia Blain’s last novel is beautifully written story of family, love, and how we drive ourselves crazy when we think we can get others to change their true natures when they don’t want to. There’s a lot of sadness in the narrative – with the loss of family due to behaviour, and sickness, and one character’s terminal illness. (make sure you have your tissues ready for the end). The book is made even sadder by Blain’s own death due to a brain tumour in December last year. 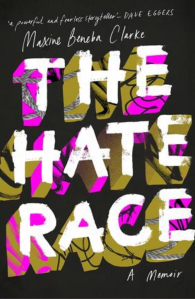 I tend to read books pretty quickly, and usually in one sitting. I couldn’t read Maxine Beneba Clarke’s book in one sitting – just the opening left me winded and infinitely sad. The Hate Race is a memoir of racism and it’s effects on Clarke as she grows from childhood into a young woman. This is a difficult read and an excellent description of the effects of racism in the young, and the effects this can have on people throughout their lives. We must do better. This book should be compulsory reading for all Australians.

This anthology is a collection of YA fiction by Aussie writers, and it’s an absolute delight. It made me so happy to read a bunch of stories in the one place that had a cast of diverse characters and great plots. I loved all of the stories in this collection, but a special mention goes to Michael Pryor, whose story about refugees nearly had me in tears. Pryor has essentially written a history lesson about all the shit things Australia has done to refugees over the last 20 years and set it in outer space. I hope lots of our young people read this and learn from our (ongoing) mistakes.

In the last week I’ve also knocked off James Corden’s memoir May I Have Your Attention Please, which was a great plate cleanser.  I’ve also read White Tiger by Aravind Adiga.

White Tiger was excellent – the writing style was unique and incredibly descriptive. Adiga succeeds in plunging the reader into the sights, sounds and smells of India. I listened to this one as an audiobook, and I was a little perturbed that the narration was by John Lee, using an accent. I enjoy Lee’s narration, he always does a great job. But there are so many talented Indian narrators, why was there a need for an English guy to do it? Please do better Audible. (This has taught me to check the narrator before purchasing a title, which is not something I’ve done before.)

What are you reading at the moment?