I can’t believe it’s March in tomorrow, I’ve been meaning to write this post for a good 2 weeks now! Better late than never right?

February marks Black History month in the US (it’s in July for us Aussies) and this year I realised something. Most books that I own which are by Black US authors are all in digital formats. This is for two reasons – the lag between the book being published in the US and becoming available here is significantly more to the lag between a white authors books, and overall they just seem to not be as readily available especially not in hard copies.

So this month I took the step of signing up to an online subscription service (not related to Amazon) so I could see what I was missing out on. And boy, do we miss out! I shouldn’t be surprised, the Aussie book market is a small, odd beast and given how terrible most Aussies are at reading our own not-white people, it’s probably not surprising that we wouldn’t get much of an influx of African-American authors and their books into the market.

So here is what I’ve read for US Black History Month:

I started with some memoirs first: 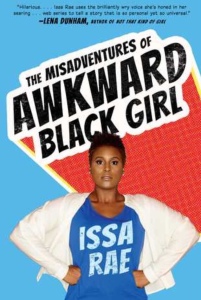 Because I’m pretty woeful with popular culture that isn’t book related, I wasn’t familiar with the work of any of these amazing ladies prior to picking up their stories. Their recounting of their experiences were raw, compelling and utterly heartbreaking. Their strength and determination is incredibly inspiring. Rae talks of the struggle of living between African and American culture and how restrictive it is to live within the expectation placed on Black people by white culture. Union talks about the way white people look at her with suspicion and how she fears for her family because they live in a mostly white neighbourhood, where being Black means you are automatically suspect. Haddish’s life story is so incredibly heartbreaking.

This Will be my Undoing by Morgan Jenkins

While this is also technically a memoir, this debut is more a series of feminist essays (I think). Morgan Jenkins writes specifically about what it is like to be in a black body while living in a white world and how this shaped her thoughts about herself living in that world. I enjoyed this collection and I’m really excited to see Jenkins’s future work.

I also read Murder in G Major and Death in D Minor both by Alexis Gordon – be warned, the cliffhanger at the end of the first will have you screaming at whatever format you are reading.

Gethsemane Brown is an African American woman who has been hired by an Irish boy’s school to get their school orchestra up to speed for the regional competition. It turns out that she ends up having an unexpected housemate – the ghost of a man killed 25 years previously who begs for her to help him by uncovering proof that he didn’t murder his wife. I was involved in music from a very early age, so a cozy mystery that comes with a Black main character and musical nerdery made me very happy.

I’m so happy I’ve found a new repository of African American authors and books and I’m looking forward to working my way through all the new-to-me stuff I’ve found, I’m also grateful for the work these people are doing to talk about institutionalised racism. I really hope the human race can figure out how to not be dicks to each other over things like melanin.

What did you read for Black History Month? What would you recommend for a non-US person to read? Who are some of your favourite African-American authors that I wouldn’t have heard of?