Did It Really Take A Literary Prize for Aussies To Realise Refugees in Detention Are Suffering?

Hi folks! Today I’m going to talk a bit about the effect Behrouz Boochani’s prize at the Victorian Premier’s Literary Awards has had on the way refugees in detention have been talked about by the media and our politicians.

Behrouz Boochani’s book No Friend But the Mountains is amazing for a number of reasons, the first being the fact it exists at all. Boochani, a journalist by trade, has been imprisoned on Manus Island by Australia since 2013. He wrote this book on a mobile phone, texting sections to his translator.  Boochani tells of his journey by boat from Indonesia, his arrival in Australia and the following imprisonment on Manus Island. He details the mistreatment of the refugees and terrible conditions on the island. It is a moving and deeply disturbing account.

Since Boochani won the award, there has been a lot of media attention about the health of those left on Manus and Nauru (Manus is for men only, Nauru is for families and children) and the fact that essentially all those left on the islands need urgent medical care.

The government in the past has overridden medical advice to bring sick inmates to Australia for treatment. There was an instance in 2015 where a female inmate was raped and the government refused to bring the traumatised woman to Australia for an abortion. You can read more about this here. There was also the instance of Hamid Kehazaei’s death in 2014, after the government initially refused to evacuate him for treatment for a cut foot. Although permission was granted a few days later, he was declared brain dead in early September. The inquest that followed found his death to have been preventable and recommended that health care on the island be properly funded and run. This was ignored.

The Guardian published this article last year, in honour of those who have lost their lives while being detained by Australia on Manus and Nauru.

On February 12 (less than 2 weeks after Behrooz’s win) the sitting government lost the vote on the Medevac Bill – the first time a sitting government has lost a vote in the House of Reps since 1929. The Medevac bill allows for the opinions of 2 or more medical practitioners to override any opinion held by the Minister (unless on the grounds of a security risk – ie the detainee holds a “significant ” criminal record). This is a handy list of facts about the bill if you want to read some more about it.

The government has doubled down and is attempting some serious damage control with a new headline in their pet media outlets every day outlining why the Medevac bill is Bad. It will allow healthy prisoners to come here (although we’ve already been told they would all qualify due to ill health), there aren’t enough hospital beds to treat all the sick people on Manus and Nauru AND Australians as well (we know hospitals are underfunded, and given the way hospitals prioritise treatment of the ill, then the either the first statement is incorrect or this one is). Also the good old “the boats will start coming again” cry, because the reason these heinous detention centres were opened in the first place was to “stop the boats”. We don’t actually have any proof that the boats have stopped – the Coalition government removed the compulsion for the public to be notified when this occurs, and word of mouth indicates that the boats are still coming, but are being turned around by border patrols.

Australia’s treatment of refugees who arrive by boat has been terrible this century. It’s great that the Labor party and Independents are working to help those still on Manus and Nauru, but the detention centres should be closed and the people brought to Australia (we still have onshore detention centres).

The government and media hyperbole around refugees makes me really mad for a number of reasons.

The sudden flurry of interest from the opposition is welcome but is certainly overdue. The information of how terrible the situation is on Manus and Nauru is not new. Sarah Hanson-Young from the Greens released photos in 2013 from her visit to Manus and spoke about the terrible conditions on Nauru . In 2016 she was banned from visiting Nauru and called out the “culture of secrecy”. A number of refugee organisations including Kon Karapanagiotidis and the ASRC have spoken out about the treatment of prisoners on Nauru and Manus. Boochani himself has been writing for the Guardian for a while about the conditions on Manus. This information has not been kept secret.

Books are important. Books give a perspective of those whose perspectives we can’t usually see, and give a voice to those we don’t usually hear. In this instance I suspect the international attention focused on Australia after Boochani won the prize was part of the turn around in attitude from politicians.

I hope the Medevac bill passes. I hope Australians realise that we need to fulfil our duty of care towards these people that we have so greatly harmed. I hope we #bringthemhere .

Boochani tweeted the following today. Check out the last line. 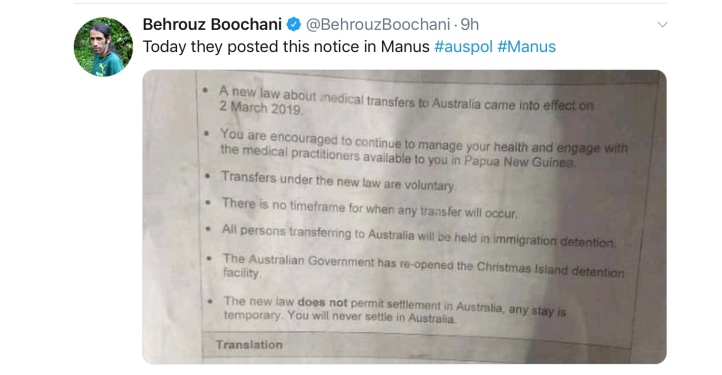