The Best of my March Reads

I have read a lot more books this month than usual (25!) and a lot of them were fabulous, so I thought I would tell you about my faves and how I will be using some of them towards my various challenges. 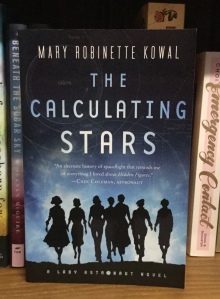 I loved this book so much. Mary Robinette Kowal’s writing is like a fresh autumn breeze and the story totally sucked me in. It’s the 1950s and the US is hit by a catastrophic event that means the Earth will become uninhabitable in the very near future. Elma is an amazing mathematician and has worked as a pilot, and she is determined to be one of the first people into space. She has to overcome the patriarchy, 1950s tech and her own preconceived notions about race and privilege to get there.

I’m using this for the “Alternate History” Prompt for Read Harder.

This is the perfect queer YA zombie story that I didn’t know I needed. The story is told from the points of view of three different queer young people in very different situations. They watch as the end comes and their families and friends die. They wonder how to survive in a world without things like food and Twitter. They watch other humans do terrible things to survive – and sometimes do terrible things themselves. The queerness in this book is simply part of the world, but it is an integral part of the way the characters experience the world. My favourite thing was that none of the characters was assigned a gender pronoun by the person they were interacting with until the person had identified themselves. Brilliant.

I’m not using this one specifically, but it would fit the non-binary author prompt and the fewer than 100 reviews prompt for Read Harder and the Spec Fic prompt for Aussies Rule.

Part of my Around the World Reading challenge this book is repping the Marshall Islands, which is a small group of islands in the Pacific which was once used as a nuclear testing ground by the US and is very threatened by climate change. Jetnil-Kijiner pours rage, pain and sorrow into her poems for her people and her country. This is an incredibly moving collection.

I’m also using this for Read Harder as a poetry collection published since 2014.

I picked this one up as I had heard so much good stuff about it. I didn’t realise it was a novel in poetry (even though it says it right on the cover). Acevedo beautifully captures the voice of her young poet, her experiences as a young person of colour and the child of immigrants who just wants to be free to be herself, without the incredibly heavy expectations of her parents weighing her down.

I’m using this for the book by a woman and/or AOC who received an award in 2018 for Reader Harder.

This little queer novella set in 1940s San Francisco is an absolute delight. The story is set around a group of women who exist on the outer rims of society due to their sexuality and/or race. This is mostly the story of a romance between an amazing artist Haskel with a rough exterior and Emily, a nightclub performer. Add a loser ex-husband, some magical realism and a wonderful cast of queer women, Passing Strange is indeed a magical little book that will make your heart happy.

Short listed for the Stella Prize, The Bridge is a fictionalised perspective of the West Gate Bridge disaster in 1970 and the impact of trauma on the community. Antonello was a worker on the bridge when it collapsed. He survived, but 35 of his friends and colleagues did not. 40 years later, Jo and her friend Ashleigh are nearly done with school, when an accident on the bridge changes their lives forever. This beautifully and harrowingly written book examines how trauma effects both individuals and the community (especially the working class).

This is an unapologetic and unflinching memoir by Carly Findlay, who lives with a severe and rare skin condition (ichthyosis). Findlay talks about the experience dealing with her skin condition, her initial reluctance to see herself as disabled, and the difficulty of living in a world where facial difference is seen as a shocking offence (against the privileged majority). She details how exhausting it is to have to deal with other people’s reactions and the expectation of the privileged majority that someone with a visible difference is also obliged to answer any question put to them, no matter how rude. I highly recommend this one.

I’m using this for the Aussies Rule prompt for a book by a disabled Australian (although I think Carly would prefer that to be reworded as “a book by an Australian with a disability”).

I listened to this one on audio, which was narrated by a delightfully Scottish gentleman. I’ve never read Nesbo before so I’m not sure if this is his usual style, but I really enjoyed this retelling a lot more than I expected to. I enjoyed life Nesbo breathed into some of the more minor characters, and the personality flaws that he used to weave this tale. You probably don’t need more than a basic understanding of the outline of Macbeth to enjoy this one. 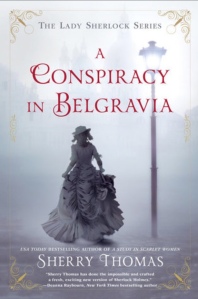 It’s official, I love the Lady Sherlock series. I love that Charlotte is young, wilful and shows no fear. I love that she prefers lots of bows and flounces and ribbons and damn, her food addiction! I also love the circle of women that pull together in these books to bring about the myth of Sherlock. Thomas’ writing is great with lots of nods to the original stories. And the twist in the last sentence of this makes me hope the library can get me the next one really fast!

So there we go!

How was your reading March? Tell me your favourite reads!